Hurry along to the Serpentine if you want to see a carrot balancing on a Coke bottle and witness the collapse in artistic values. 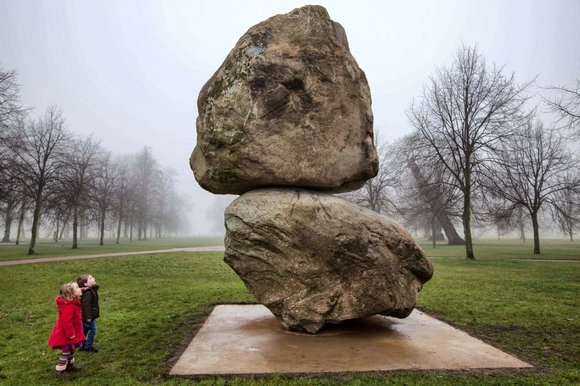 This week’s subject is: favourites. Or perhaps if I called them teacher’s pets, you’d get a clearer idea of what I’m thinking about. Why are some artists admired beyond their worth by some galleries, while others are not?

Watching the absurdly unimpressive Simon Starling playing with the huge and expensive TV toys that were needed for his underwhelming film installation at Tate Britain, I felt I was watching a polite schoolboy going about an IT project. How did this innocuous geek, who has so little of depth to say about his work, earn the right to claim the vast halls of the Duveen Galleries? And over at the Serpentine Gallery, those long-standing teacher’s pets from Switzerland, Fischli/Weiss, have been given the whole of Kensington Gardens in which to balance a couple of rocks. The idea must have taken them, oh, 20 seconds to come up with. Perhaps 10.

Peter Fischli and David Weiss have been the teacher’s pets of the biennale crowd for 20 years now. No show of theirs has ever caused anyone to run out of it shouting: wow, amazing, what great art! The best you could ever hope for was a small smile of enchantment. This is art directed at those tiny pleasure zones where little things amuse you. Things like a mechanical bird tweeting in a rococo cage. Or a Swiss clock in which two shepherds and a lamb pop out at midday, with a charming “ding”.

Their best-known work, the one that made their international reputation in the 1980s, was a piece of filmic slapstick called The Way Things Go. For 30 minutes, an unglamorous cast of everyday studio objects — chairs, balls, bottles, cutlery — fell over and hit something else, which hit something else again, and so on, in a pleasantly bathetic chain reaction. The film’s charm depended on the ingenuity of the arrangement, and on its mood, which was tragicomic and flickery, like a Buster Keaton movie. Inside the Serpentine, a small selection of Fischli/Weiss photos from that era sees them balancing more unlikely objects in this Keatonish fashion. If you ever want to see a carrot balancing on a Coke bottle, this is the display for you.

So it’s intriguing, but lightweight. And that has been true of Fischli/Weiss’s work ever since. In Light Show, that marvellous event about artificial lighting at the Hayward Gallery, they have a piece called Son et Lumière: a plastic cup spinning on a motorised cake stand, casting broken reflections on the spaces behind. It’s the least substantial piece in the show, but it has that dry, tragicomic aspect that passes so readily for meaning among the admirers of Fischli/Weiss.

It’s there as well in the two lumps of granite that have been precariously balanced outside the Serpentine in a work called, very Fischli/Weissly, Rock on Top of Another Rock. When you see lumps of rock as huge as these, more than five metres tall, you expect to feel some sense of grandeur before them. My hope was that Fischli and Weiss had finally got in touch with something bigger in their Alpine selves and were going to deal with proper art emotions such as awe and scale and mystery. But no. For a moment or two you wonder how it was done, then off you go, 98% untouched, in the classic Fischli/Weissy way.

The Serpentine’s publicity machine tells us this “deceptively simple gesture” has created a work that is “both incongruous and startling”; and that “Fischli/Weiss have continuously demon­strated that irony and sincerity could not exist without each other and that, in fact, there is no sincerity like irony”. Ha!

The huge glacial boulders were sourced in Wales, which surely means some specific ­reference was intended to Stonehenge. The Stonehenge rocks were sourced in Wales as well, transported somehow to Wiltshire, then formed into that mighty ring of balanced stones that stands so incongruously on Salisbury Plain. Fischli/Weiss have gone for a similar incongruity: the last thing you expect to see in Kensington Gardens is two crude slabs of prehistoric Welsh granite. But the Stonehenge angle is also a sure sign of tourist thinking. It’s like making art about London bobbies or red telephone boxes.

The piece doesn’t work for various reasons. First, because nature got there long before Fischli and Weiss and has left us many more exciting balances. Go to Cappadocia or Monument Valley and you will see balancing rocks that make your body tremble and refuse to go closer. These rocks have an ugly lumpishness to them and could never charm you with their natural beauty. No doubt their ugliness is deliberate, another stab at bathos. But because their balance is so crudely achieved, you merely ask: so what?

The thinking here is so trite, such back-of-the-envelope stuff, that that naughty art-world monkey, Gorilla gorilla cynica, hops quickly onto your shoulder and begins whispering: how much did it cost? Why was such huge effort expended for so little gain? The answer is simple: because it’s Fischli/Weiss.

I’m not going to waste your time, either, going on about how grim the Rosemarie Trockel show is inside the Serpentine. Yes, she’s another of the art world pets. But her show, called A Cosmos, is so uncommun­icative, so inconsequential, so ­horrible, that no words of mine can do it justice. To see how ghastly it is, you will have to visit. Take a German dictionary. You’ll need it.

Simon Starling is one of the contemporary British artists on whom the Tate appears to have a teacher’s crush. Martin Creed is another. Tacita Dean a third. All three specialise in art that looks intriguing from some angles, but never becomes fascinating.

Starling, who won the Turner prize in 2005, has been handed the huge Duveen Galleries, which run right down the middle of Tate Britain. True to form, his contribution sits there at one end, like a nervous guy at a party. Phantom Ride, as his film is called, is a piece of computer trickery that swoops up and down the galleries at seagull height, encountering works that were shown here in the past. Warhol’s Elvis. Epstein’s Rock Drill. Picasso’s Charnel House.

It is another back-of-the-envelope idea. And, once again, it took a hell of a lot of accomplishing. How much is made clear in an explanatory video, directed by the excellent Susan Doyon, playing in the corridor next door. Apparently, it took 50 people to produce the few minutes of Phantom Ride — camera operators, focus pullers, lightsmiths, machine operators, motion-effects wizards, computer graphics technicians. The artist can be seen wandering about on the side, watching them. Michelangelo, working on his own, took four years to paint every inch of the Sistine ceiling. Starling, working with 50 others, at unthinkable TV expense, took a few weeks to produce five mildly diverting minutes of film. For a clear view of the collapse in values that has disfigured the art world, hurry along and watch Phantom Ride.