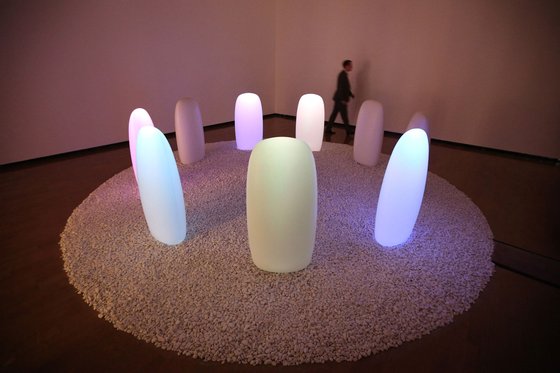 Two important events are due to occur on Friday. Both have ­connections with the Royal Academy. The first is the last day of the ­Algernon Newton exhibition; Newton was an undervalued Royal ­Aca­demician whose atmospheric cityscapes from the 1930s I’ll be admiring further on in this review. Before that, we need to deal with Friday’s other big event: the end of the world.

According to complex readings of the Mayan calendar, ­Friday is going to be the last day of human existence. Fascinatingly, the Mariko Mori show that has just opened at the Royal Academy also cites this big day, December 21, as its peg. The show has been timed, the press release says, specifically to tie in with the winter solstice, the Mayan apocalypse and the ensuing cycle of cosmic ­regeneration. Indeed, its title, Rebirth, is a direct reference to the big interrelationship between these big beginnings and ends.

All this is, of course, complete twaddle. As an institution, the RA’s press office is spectacularly unqualified to make any trustworthy pronouncements upon cosmic chronology. Regular readers will know already where I stand on new-age thinking, Mayan calendars, winter solstices and the like. In this case, however, having enjoyed a quick guffaw at the RA’s antics, it seems pertinent to tiptoe across the outer perimeters, at least, of the druidic mind-set.

The fact is, Mori’s art is so transparently addicted to cosmic ideas, so deeply embedded in new-age thinking, that to leave the implications of ­December 21 entirely unconsidered here would constitute an act of avoidance. The first thing you encounter at the top of the opening stairs is a glowing blob of pale ectoplasm, suspended from the ceiling, which seems to be whispering cosmic poetry at you. On closer inspection, the glowing blob turns out to be two interconnected blobs, vaguely birdlike in their out-lines, a pair of phantasmagorical peace doves, inspired, I fancy, by the streamlined bird forms of Brancusi, enjoying an abstracted cuddle.

Their poem tells you: “We are here/We came here to experience love/We came here to feel peace/We came here to share harmony.” It’s twaddle, yes, but because it is delivered by Mori herself, in a sexy Japanese ­whisper, it seems somehow to have done away with the need to mean anything secure. This is the poetic equivalent of the canned music you hear in ­Japanese lifts: soothing word sounds ­welcoming you to the building and promising an absence of friction or harshness in the experience ahead.

The exhibition that follows duly pursues a relentlessly cosmic agenda, with a succession of soothing sights that ebb and flow, pulse and throb, quiver and glow. Mood-wise, it’s like swimming through a gigantic lava lamp. The huge opening installation, called Tom Na H-iu II, is a perfectly white room, at the end of which stands a throbbing glass monolith shaped like an enormous truncheon, three times taller than you. White it glows, then blue, then white again. Apparently, this glass menhir is hooked up to a ­science lab in Japan that is actually monitoring neutrinos emitted by a dying star, so what you are watching is the final ballad in light of a fading supernova.

A few twilit throbs deeper into the show, you come across Transcircle 1.1, a ring of nine more artificial menhirs, ­coloured pink, green and yellow. This time, their colours are in sync with the orbits of the planets in our solar system. Imagine the Avebury ring remade in acrylic and hooked up to an inter­planetary LED display.

All this is gently fascinating and dreamily beautiful. Everything you see here is done with plastics and polymers, LED lighting and Lucite, yet the moods that are being searched for are invariably ancient and Buddhistic. Somewhere way back in the Japanese past, the new and the old seem, ­amazingly, to have settled their differences and bonded. The proportions Mori refers to in Transcircle 1.1 may be primitive and Stonehengey — the proportions of monoliths and menhirs — but the atmospheres she ­creates are elegant and minimal, as if your spirit is being expertly massaged by an invisible geisha.

When Mori first appeared, in the early 1990s, having trained as a fashion designer, she would dress up as a manga robot and photograph herself riding up escalators or dancing in the ­lobbies of toy shops. The “video vixen”, they called her. At the time — the Cindy Sherman era — lots of women artists were dressing up as other people and energetically sifting through the gender identities muddled up in their sock drawer. Yet where that work felt like an investigation of female depths, Mori’s version seemed instead to cele­brate female superficiality. Presenting herself as a cute manga robot, encased in silver foil, she became one robot among many.

In this display, too, it is interconnectedness that is continuously being stressed, rather than difference. The show’s finest work is her newest: a dark spiral tunnel down which you wander, and from which you emerge, blinking, into a haunting twilight with an oval opening above it. Through this oval, you look out at an artificial sky across which a wandering glow is nimbly ­tracing another mysterious spiral in the dark. Impeccably presented, precisely calculated, faultlessly engineered, these are totally batty creative effects of the sort you get only from Japanese artists. Yayoi Kusama has her dots. Yoko Ono has her all-white chess pieces. Mariko Mori has her plastic cosmos.

And if, on Friday, the cosmic gloomologists turn out to be right, and the end of the world does indeed commence, I can think of far worse places to stand and face it than under the oval opening of Mori’s sweetly whispering artificial sky. See you there.

At the Daniel Katz Gallery, Algernon Newton would make another good companion for the big goodbye. His vision was so calming and gentle. Beavering away quietly in the 1920s and 1930s, Newton was that rarest of presences: an artist of substance whose career somehow ended up getting shoved behind the sofa.

Although he painted landscapes, too, it is his moody views of quiet corners of north London that are truly special. In a ­Newton cityscape, nothing much happens. There’s a canal. A road. Some houses. Some shadows. The ordinary world is being inch-perfectly described and enjoyed for its ordinariness. That’s what you think initially. Then the Newtonian effect takes hold. The shadows begin to feel a tad lengthy. The ordinariness of the houses starts to feel spooky. The evening light effects stop feeling tranquil and start feeling ominous. Something is about to happen. On second thoughts, perhaps the Algernon Newton exhibition would not be a good place to head on Friday.