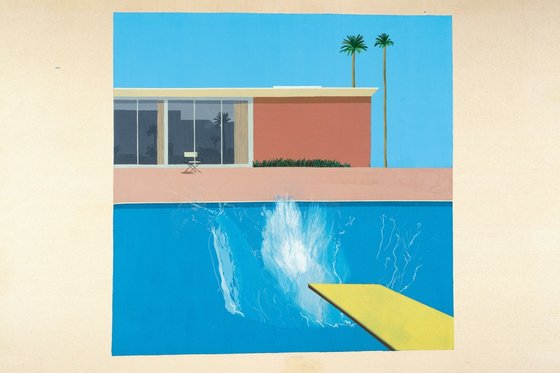 To prepare for Tate Modern’s complicated new show, I have been compiling a list of things that David Hockney and Jackson Pollock have in common. So far, my list has grown to one. Both of them are male artists. If smoking counted, it would be two things. In Hans Namuth’s famous film of Pollock in action, creating a painting in his garden, there’s a fag dangling permanently from his lip, and the ash sometimes drops onto the canvas, to be incorporated for ever in his art. Hockney’s pro-smoking stance is also notorious. He is the loudest champion of every Englishman’s inviolate right to puff on their neighbours and give them cancer.

In this instance, however, smoking does not count. It belongs to a different arena from the one into which Tate Modern has tiptoed unsteadily in this often baffling investigation of the relationship between performance art and painting. Talk about a shotgun wedding. You would have thought that performance and painting have nothing in common. As I understand performance, it’s a way of making art that actively opposes painting. But then I’m not a Tate curator. Here, not only have performance and painting been brought together in a shared show, Pollock and Hockney have been roped in as well, as joint agenda-setters.

The first room contains two paintings arranged in a face-off: a Pollock on the left, a Hockney on the right. The Pollock is Summertime, from 1948, a busy swirl of blacks, reds and yellows, ice-skating furiously around a long linen canvas. Less dense than most Pollocks, full of light patches where the canvas shows through, Summertime is not one of his best pictures. But it’s the best in the Tate collection, so it will have to do. In a nice curator’s touch, it’s shown on the floor, as Pollock painted it, with that famous Namuth film of him in action playing simultaneously on the wall above.

Pollock in action is like one of those ugly sea creatures that look clumsy out of the water, but elegant in it. Backwards and forwards he drips — bald, bristling, busy. Sometimes he’s jerky; suddenly he’s balletic. It’s marvellous to watch, a full-bodied, exciting way of making art that fully deserves its technical name, action painting. The clever combination of the film on the wall and the ­picture on the floor is fascinating to ­witness, and makes the point, firmly, that painting, for Pollock, was an act of ­performance.

Unfortunately, that is the last occasion on which any clear point is made here. From then until the end of the display, it’s hit-and-hope curating all the way, with a melange of confrontations and up-sums, chronological leaps and shows within a show.

Hockney’s A Bigger Splash hangs opposite Summertime and gives this exhibition its title. It’s probably his best picture, so famous I hardly need to describe it to you. A swimming pool. A Californian sky. A poolside villa. And, right in the middle, a large splash of white water, ejaculating out of the pool like a big spurt of jism. The smutty simile is not inappropriate. Hockney has never been shy to admit that sex was one of the chief attractions of Los Angeles. A Bigger Splash reeks of hot afternoon desires and explosive penetration. It’s difficult to imagine a scene with less Bradford in it. But what has it got to do with the show’s subject? And why is a figurative Hockney from 1967 hanging opposite an abstract Pollock from 1948?

The answer, as far as I can make out, is that both pictures are the products of a performance. With Pollock, the performance was short and physical, and involved the actual making of a painting. With Hockney, the performance has lasted a lifetime, and involved dyeing his hair and moving to LA. It’s a point amplified by the Jack Hazan film, also called A Bigger Splash, that plays on the adjacent wall. It shows the cute and quirky Hockney from his younger days flitting ambiguously from pool to painting, from real space to painted space, from reality to fiction. His performance has been his life.

The show ahead tries to follow these promptings from their origins to their conclusions, from then until now. On the Pollock side of the story, it was Namuth’s film of him in action, rather than the drip paintings themselves, that had the biggest impact. The pugnacious little art-dance of Jack the Dripper became the Gangnam video of its time: widely seen, widely enjoyed, widely influential. In Japan, gutai artists began dangling from the ceiling on ropes and painting their canvases with their feet. In France, Yves Klein covered a harem of naked girlies with blue paint and dragged them across the paper. In Austria, the notorious Vienna actionists can be seen eviscerating a calf and smearing themselves with its blood as they writhe naked on the floor below.

Because this is the Tate, and the Tate doesn’t do emotions, all this smearing, splodging, writhing and stripping is ­presented coolly as a set of avant-garde strategies for making art in new ways. Seeing it all together like this, though, made clearer to me how much violence and nihilism was actually abroad in the age of the happening. The middle of this show is downright scary. Were there really this many artists, in this many places, this keen to whip off their clothes and regress into prehistoric trauma by smearing themselves with blood and paint? Pollock’s example lifted the lid off some dark and tortured artistic ids.

Had the show stuck to this line of inquiry it would have been a genuinely useful event — a revisionist exhibition, no less. Alas, having set itself a schizophrenic agenda, it soon veers off to ­investigate the Hockney side of the story, or what the wall texts here describe, startlingly, as “feminist and queer perspectives”. When did “queer perspectives” become a handy art-historical shorthand?

Hockney’s transformation from a mousy Bradford boy to a showy LA blond is presented as the precursor of all those feminist artworks of the 1970s and 1980s that involved dressing up and becoming someone else. Thus we see Valie Export mocking the macho aesthetics of the Viennese actionists, and their taste for female nudes and blood, by making herself look like David Soul in an episode of Starsky and Hutch. Cindy Sherman pops up, of course, and runs through a repertoire of her more Chaplinesque looks.

All this connects well with performance. But what has it got to do with painting? The fact that most of these transformations were achieved with the use of heavy make-up is surely a dodgy excuse masquerading as a reasonable explanation. As so often happens in ­displays of modern curating, a feminist agenda has kidnapped chunks of the exhibition and pointed them in another direction.

An even bigger lurch onto different territory occurs at the show’s halfway mark. Suddenly, the survey of painting’s relationship to performance turns into a succession of individual shows in which various contemporary artists, whose work touches on these notions to a greater or lesser extent, are given a ­gallery to themselves. Marc Camille Chaimowicz presents an entire living room given over to the moods and flavours of that irritating French gadfly Jean Cocteau. The premise seems to be that, if Cocteau were a room, it would look like this. Lots of pinks. Hand-drawn. Frilly. I never imagined that anyone, anywhere admired Cocteau any more, but Chaimowicz proves me wrong.

I much preferred Lucy McKenzie’s spooky trompe l’oeil installation of a dusty salon in which all the walls have been painted to look like cloudy skies. McKenzie, who lives in Belgium, is surely paying tribute to the surreal skies of René Magritte, but it’s the sad, faded, ­forlorn atmosphere of these neglected spaces that you remember, not their surrealism. It’s a fabulous piece. But what it has to do with painting’s relationship to performance is anyone’s guess.

So, plenty to be annoyed by, but also things to be enjoyed. A show that is all over the place for much of its length detours occasionally from its confusion to become interestingly lucid.