Waldemar on Poussin’s Extreme Unction, at the National Gallery 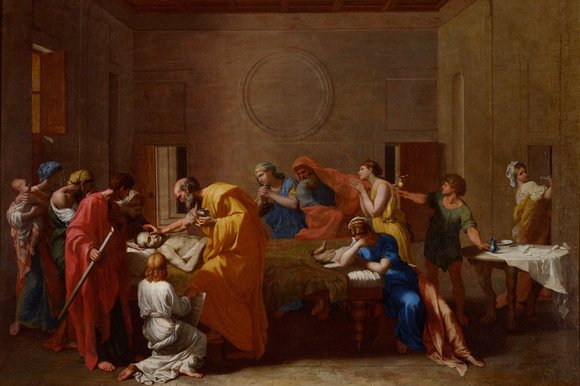 A choice. Will it be the single painting about death hanging in a bare room at the National Gallery? Or the dozens of bronzes, from all eras and all ranks of talent, bronzes by Rodin, bronzes by Picasso, bronzes by Donatello, spotlit for drama and ranged across the mighty upper ­galleries of the Royal Academy? Which of these displays offers the finer artistic experience?

Regular readers of this column will have begun suspecting my answer when “spotlit” popped up. If not earlier. As an artistic experience, there is no com­parison. Involving yourself with Poussin’s solemn and powerful imagining of the Catholic sacrament of extreme unction lights up your insides and fills your head with thought. Going to Bronze, at the Royal Academy, is like attending a son et lumière for cruise-ship passengers.

I should add that I am mildly surprised by my enthusiasm for Poussin. He has never been a painter who is easy to admire. His qualities, the ones that people go on about, his calmness, his nobility, his sense of eternal order, are not qualities that set the modern mind on fire. We prefer his rousing ­contemporaries — Rembrandt, Velazquez, Rubens — proper baroque painters who know how to trigger a passion and excite a loin. Poussin, with his calm classical moods and his stern ancient themes, seems too quiet for the 17th century.

Until you look properly, that is. In its permanent collection, the National Gallery has a room of Poussins that I am prone to bustling through. On one such bustle, however, I happened to look more carefully at a small painting featuring satyrs and nymphs. Poussin paintings often feature satyrs and nymphs dotted about a pretty Italian landscape. But look more carefully at his Nymph with Satyrs, from 1627, and you will see something genuinely shocking. A naked satyr has pulled away the coverlet from a nude nymph, but she is too busy mastur­bating to notice. Meanwhile, behind a nearby tree, another naked satyr, who has been peeping, is now busily spanking the monkey. It’s a Poussin, but its lascivious subject matter would make Peter Stringfellow blush.

I mention this because all that famous classicism and order for which ­Poussin is celebrated is mightily deceptive. He looks like a neat nibbler of cucumber sandwiches, but what he actually is is a greedy gulper of big helpings of pasta. In Extreme Unction, the superior masterpiece that has gone on show temporarily at the National Gallery while the nation sends around the hat to try to stop it going abroad, Poussin surpasses himself. This marvellous painting is a beautifully calm envelope in which so much that is so momentous has been sealed.

We are at a death scene. Extreme unction is the seventh and last of the great sacraments with which we Catholics mark out our lives. Baptism is the first. Marriage the best. And then, at the end, extreme unction, a rubbing of oil on the eyes, the lips, the nose, that predicts the end of life and the beginning of whatever follows. In a hauntingly effective use of symbolic space, ­Poussin has left the entire top half of his picture empty. Thus, the room itself has been roped into symbolising the huge, looming unknown that awaits us.

The priest is the bearded apostle figure in a yellow toga who is rubbing holy oil into the dying man’s eyelids with his thumb. It’s a beautifully observed gesture. The dying man — and you need to lean closer to the actual painting to appreciate this — is very precisely coloured: white enough to be dying, pink enough to be still alive, just. Arranged around his bedside, the rest of the picture’s cast adopt an array of poses that seem to broadcast a sense of tragedy across the entire space, like an echo.

Judging by what the cast is wearing, and by the styling of the architecture and the furniture, we are in Rome in the earliest days of Christianity. ­Perhaps the glowing figure of the priest is St Peter himself, the first bishop of Rome. Poussin picks him out not with the ­son et lumière obviousness that characterises the lighting at the Royal Academy’s Bronze exhibition, but with a subtle and gorgeous yellow glow that seems almost to be coming from inside him.

At the bottom of the bed, a particularly weepy mourner must be the dying man’s wife. On the other side, a nurse brings in a baby to remind the viewer that all beginnings lead to an end. In a marvellous touch, the servant girl on the right is the only person in the picture who actually looks at us. No matter which century we are watching from, she pulls us into the story, because this is our fate, too.

Another lovely touch is the dirty feet of the figure kneeling in the foreground, the one in white, with the long golden hair. I’m pretty sure he’s supposed to imply the presence of an angel, come to carry the dead away. Everyone here has bare feet. And the superb painting of the terracotta floor that has dirtied them, the brilliant capturing of its sandy textures, is on its own worth the £3.9m that the nation needs to find to keep this painting for the Fitz­william Museum, in Cambridge. If they had had a cash box in the room, I would have emptied my pockets into it there and then. As it is, I hope you will join me in adding a donation at artfund.org/poussin.

The National Gallery’s decision to show this great Poussin in London in aid of the Fitz­william is a typically scholarly and generous gesture by Nick Penny, the present director of the gallery. His ­predecessor, the disappointing Charles Saumarez Smith, who is now the big cheese at the Royal Academy, has always struck me as more of an effects man — keener on how it looks, than on what it says.

Bronze, a showy show ­showily devoted to one of art’s most showy materials, offers a very Saumarez Smithy experience. Set entirely in artificial twilight, dramatised with pools of choosy illumination, the ­display lumps together many of the world’s ­finest bronzes for no good ­reason I could discern.

The show does not actually tell the story of bronze: it’s not chronological, so it cannot do that. Neither are its themes — figures, animals, objects — inventive or telling enough to take us though the story on another useful route. Instead, we get lots of bronzes, from lots of places and lots of epochs, by lots of artists, saying lots of things.

Bronze isn’t really a single material at all. An alloy of ­copper, tin and various other metals, its final effect depends on where and when it was used. In contemporary art — examples of which by Richard Deacon, Tony Cragg, Anish Kapoor, are scattered about the parade — it has become the reproductive medium of choice for dealers wishing to peddle expensive casts of the same image. In more honourable times, it featured heavily in the artistic histories of the Greeks, the Romans, the Chinese and the Indians.

Certainly, it is flexible stuff. Leave it out and it goes green. Wax it perfectly and it’s nearly black. Sometimes it’s dark and gorgeous; other times it’s golden and brassy. The show proves all this in a plush display that succeeds chiefly in making everything look for sale.