Waldemar Januszczak admits he got Lucian Freud wrong: he was a peerless painter of humanity, not a lover of lowlife 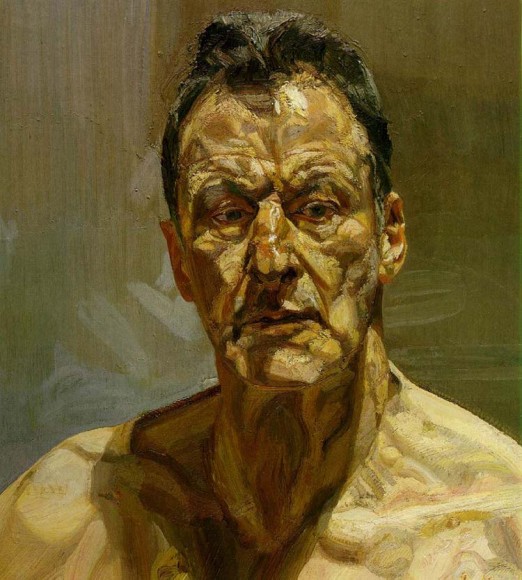 The Lucian Freud exhibition that has opened at the National Portrait Gallery has been in the pipeline for several years, and was meant to be a late progress report rather than a memorial event. Memorial shows, of course, have an air of summation to them: they tie up loose ends and attempt a final assessment. And this survey, which looks at Freud’s portraiture from the 1940s to the final painting found on his easel when he died last summer, certainly presents a fresh picture of him. Having written about Freud often in the past, I now realise where I was wrong, and why.

My chief mistake, and I am definitely not alone in having made it, was to read too much lowlife into him. Ever since the critic Lawrence Gowing described Freud’s territory as the aesthetic “of the unmade bed”, there has been a tendency to view his art from a juicy biographical slant, particularly his paintings of women. Because so many of them are naked and contorted into such seemingly harsh, exhibitionist poses, we habitually project a dark sexual motivation onto them. The shabby studio in which so much of Freud’s art is set, with its bare wooden floor and cold iron bed, is easy to mistake for a Fritzl basement. But this admirable display kicks all such grubby imaginings into touch.

Freud was born in Berlin. His family arrived in London in 1933, fleeing from the Nazis. He was already 10, so he arrived here with his differences baked in: one of those crucial artistic foreigners who have made British art what it is (and who are currently the subject of Migrations, at Tate Britain). It would take Sigmund Freud himself to work out exactly what impact having Sigmund Freud as a grandfather had on little Lucian, but at the very least it must have heightened his sense of being exceptional.

The earliest pictures in this show form an uptight procession of unsmiling men. The painter Cedric Morris puffs a gloomy pipe, while a Jonathan Rhys Meyers lookalike, self-obsessed and vain in an actorly fashion, turns out to be the collector Peter Watson. Further along the same wall are the first self-portraits. The show contains a surprising number of them. The first one, from 1943, shows the artist holding up a white feather as a dark crow on the window ledge behind emits an accusatory squawk.

This is not happy portraiture. Its chief ambition is to achieve a symbolic encapsulation of an alienated mood. The colouring is dominated by unglamorous wartime beiges. And the debt to the art of others — Modigliani, Soutine, the Neue Sachlichkeit painters of Germany — is obvious.

Although the display ahead never dispenses entirely with the neurotic tonality of its glum beginning, the arc it now forms can be understood as a slow cheering up. Freud himself was involved in the planning of the route, so the exhibition sticks to a legible chronology, with none of those irritating jumps between themes that blight so many Tate displays. Freud’s natural tendency to paint the people who pass though his life in intense clusters gives his journey all the shape it needs.

The first such cluster features Kitty ­Garman, his first wife, the daughter of the sculptor Jacob Epstein. She appears in a lovely trilogy of wide-eyed portraits painted in the intensely artificial house style of Freud’s youth. By exaggerating the triangle of Garman’s face, widening her eyes into giant ovals and actually giving her a cat to hold, he makes Kitty fully ­kitten-like. His second wife, Caroline Blackwood, inspires the next cluster. She, too, has impossibly large eyes and an air of haunted introspection that caused ­Herbert Read to describe Freud, famously, as “the Ingres of existentialism”. In the most telling of the Blackwood portraits, Hotel Bedroom, painted in Paris in 1954, she clutches at her face in bed while a dark and mysterious Freud, backlit against the street scene behind, stares at us from her side. Guardian angel or lurking predator?

Hotel Bedroom was the last painting produced in this strikingly artificial early style. Until now, Freud had painted in the Magritte manner, sitting by a table, but from now on he would stand at an easel. The fine sable brushes he had used so obsessively to define every stray strand of Garman’s hair were swapped, too, for a set of coarse hog’s-hair brushes. It’s a dramatic and unique lurch. The beginning of the show is in one style. The rest of it in another.

It actually takes several years for the big change to work. The late 1950s are this ­retrospective’s least tangible epoch. Painted in 1958, the only woman in Freud’s entire harem who attempts a smile succeeds only in directing at us a nervy rictus that a ­Hallowe’en skeleton would be proud of. Painting mostly head and shoulder views, Freud is feeling his way effortfully towards a more sculptural style of painting. And the first successful fruit of this new approach is another self-portrait, from 1963.

It’s a tiny thing, A4-size, but feels much bigger. The twisting shadows on the face, the dipping and rising paintwork on the verge of disintegration, are the marks of a painter who has developed muscular cubistic ambitions. I was reminded strongly of Picasso’s busts of his mistress Fernande Olivier, whose swirling and bulging face is observed from so many angles at once. That was a sculpture. This is a painting. Freud, you feel, has been staring at the underlying shapes that make up a face
and is trying to record the complex shifts that bring them together.

To begin with, the new method is confined to heads and necks. Then the full-length nudes begin to sprawl themselves on his itchy studio bed. The first of them is a particularly bony model painted in 1966. With her arms and legs bent into right angles, she forms an outrageous human swastika on the sheets. The show ahead makes clear that it is wrong to read cruelty or dark sexual preferences into such pictures, but this particular girl is Biafra-thin. Her white flesh glows cadaverously in the artificial light of night, and it takes willpower not to see her as a vulnerable female specimen being examined harshly under the painter’s microscope.

Thus, an exhibition that begins as a modest arrangement of pint-sized portraits turns at tanker speed into a visceral and exciting display of figure painting. The ­pictures grow larger and larger until they reach, in the spectacular room devoted to the Australian performance artist Leigh Bowery, the height and heft of the back of a London bus. Bowery was a whopper. His penis was the size of a small pig. Being a shameless poseur by nature, he took instinctively to the ludicrous nude poses the artist gets him to adopt — lying on the floor with his legs in the air, slumped on an armchair flashing his python. Not since Rubens has any artist taken this much pleasure in describing this much flesh.

Bowery’s friend Sue Tilley, the famously fat benefits supervisor who inspired some of Freud’s greatest art, has a room to herself as well. Slumped, snoring, mountainous, she constitutes a magnificently fleshy riposte to every touch of every airbrush ever applied to any woman.

This has now become portraiture of startling originality and exceptional pictorial courage. Freud is capable, too, of a genuinely unusual range of moods. A room devoted to portraits of his mother sees him noting her ­vulnerability and expressing such tenderness towards her. The standout mother portrait shows her in a white and gold paisley dress, stretched out on that itchy studio bed with her arms lifted as if in a crucifixion pose. It’s a typically startling juxtaposition. For an artist who claimed to despise surrealism, Freud was ever so good at throwing in surreal twists.

He could do men. Women of every size, type and colour. Old people. Babies. He does heads. He does full-lengths. And in what was probably his most ambitious painting, Large Interior W11 (after Watteau), painted in 1981-83, he also attempts some complex group portraiture. The painting hangs straight ahead of you as you enter, providing a fine opening moment. Four figures have been crowded onto the familiar studio bed: two girlfriends, son and daughter. Although they are squashed together, they don’t interact. They are four strangers from the same family, huddled together in a bare and brilliantly observed studio interior. I saw this picture when it made a brief showing in London after it was painted. And I was guilty then of underestimating it. A closer inspection here reveals how every inch of it — the clothes, the walls, the floor, the faces, the view through the window — constitutes a tiny masterpiece of depiction.

As its final observation, the show manages to notice a last phase in Freud’s art when he reached his eighties. This late shift is characterised by a new intensity in his colours and a reawakened interest in the poses of the old masters. Naked Portrait Standing (1999) borrows its sensually penitential pose from a St Sebastian, while Freddy Standing, painted in 2000, shows
a naked man, long-haired and ­etiolated, who throws a spooky shadow on the wall behind him in the manner of a medieval Christ.

Stunning is one word for this event. ­Brilliant is another. Definitive a third.