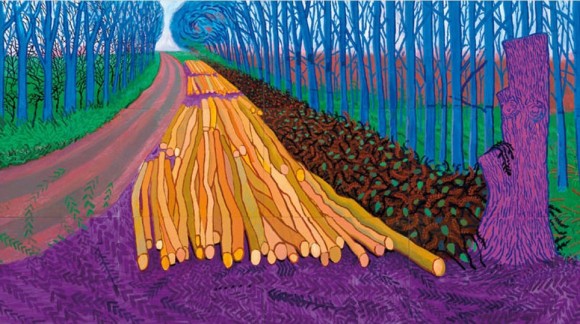 The interesting thing about all the “national treasure” guff that swirls around David Hockney these days is how blithely it ignores the defining feature of his career: his self-imposed exile from Britain. Explicitly and implicitly, Hockney has preferred a life on the other side of the world. The explicit part of this rejection was the noisy announcement, back in the 1960s, that he was moving to California and never coming back. The sun was warmer there. The boys were sexier.

Implicitly, most of the art he has produced since his departure can be understood as a celebration of the alternatives to Britain. Not only don’t we have many vivid blue swimming pools over here for white-rumped Adonises to jump into, but, more important, the colour schemes Hockney favours, all those nursery-bright reds, blues and yellows, can surely be recognised as un-British visual effects. Britain simply isn’t Hockney-coloured.

All of which makes the choice of the landscape in Yorkshire as the subject of his first museum-sized show here for three decades surprising enough to appear foolhardy. The range of effects that a landscape artist usually needs to convey — grandeur, drabness, sublimity, windiness, greyness, dampness — have little previous in his art. If ever an artist appeared unsuited to the task ahead, it is Hockney, setting out to paint Bridlington in the rain.

Not that he actually tries to do that very often at the Royal Academy. In a display of pictorial jauntiness that continues through 11 large galleries, you can count the number of raindrops being recorded on the fingers of a painting hand. Turner may have lashed himself to the mast of a listing ship in the middle of a storm, to go mano a mano with the forces of nature, but Hockney, in his landscape art, prefers the challenge of choosing the correct purple.

His journey begins promisingly in the academy’s octagonal gallery, with four views of a row of trees on the edge of a field in Thixendale. Each of the four views depicts the same spot in another season. In summer, the green trees are as plump as beach balls and the field of golden corn is as puffy as a duvet. In winter, the trees are skeletons and the ploughed-up field is a row of scars. What’s pleasing here is the lack of glamour in the chosen scene: three trees and an empty field do not constitute a naturally picturesque location. All through the show, Hockney avoids obviously pretty places and, like his idol Van Gogh, sniffs out unspectacular corners and sites of modest interest. Though some of his reworkings of the same view — a strategy borrowed from his other obvious idol, Monet — seem not to have much of a ­raison d’être, the four pictures of Thixendale, displayed beau­tifully against a maroon background, bring a sense of passing time to the display, a promise of outdoor profundity that the show ahead does not always deliver.

The next gallery contains a useful summary of Hockney’s work as a landscapist before his recent return to Yorkshire. The earliest pictures here were painted while he was a student at Bradford College of Art. It was the 1950s. Wrist-slitting moods were the order of the day. A glum street corner in Eccleshill and a particularly drab view of a Yorkshire field on a gloomy afternoon make immediately clear what he was running away from. Indeed, the very next picture, Flight into Italy, painted in 1962, commemorates a madcap dash across the Alps by Hockney and his art-school buddies from the Royal College, careering through the mountains in a wonky Morris Minor. The 1960s had come to his rescue.

The role of landscape in these cheeky pop-art paintings — to my mind, still the best things he’s done — was to provide a snappy symbolic background for the action at the front. Even when he paints a landscape without people, such as the gigantic panorama of Mulholland Drive, from 1980, which takes up an entire wall in the second room, the overall impression is of a busy shorthand. The Mulholland picture is packed with signs, marks, symbols and patches, all seeking to evoke the atmosphere of a jaunty drive through the ­Cali­fornian hills. As an actual reading of space, it’s as flat as a bedroom quilt.

Of course, there is nothing in the rulebook that says landscape art has to feel natural. But when this show returns to the business of depicting Yorkshire in a set of paintings produced in 1997-98, it does so with spectacular insensitivity. Painted from memory back in LA as a tribute to his dying friend Jonathan Silver, who had opened the Hockney Gallery, in Saltaire, the first suite of Yorkshire landscapes is unpleasantly garish: purple fields, pink walls, houses the colour of Seville oranges.

Fortunately, Hockney seems to have realised that Yorkshire is not a Paperchase product, and in 2004 he swapped the felt-tip tones for some traditional watercolours. The show immediately grows more responsive. Indeed, it enters its best phase. A beautifully damp watercolour of trees and puddles in East Yorkshire is the first occasion since the 1950s that Hockney’s art allows some British gloominess to express itself. The sunshine that lights up the adjacent fields of corn and makes something startling of the sudden expanses of rape feels once again like British sunshine, rather than the imported Californian kind.

A set of huge composite canvases depicting Woldgate Woods is a particularly impressive achievement. Choosing a quiet spot in the woods where a couple of paths intersect, Hockney takes us again to an ordinary location to watch the changing effects of the seasons. This time, the intense autumn glows he records on the floor of the forest, and the cool summer greens of the leaves in the trees, feel strikingly authentic, and uplifting. Great landscape art has always delivered more than mere depiction, and in these austere views Hockney captures not just the look of the landscape, but its impact on the spirit. We’re not yet in Samuel Palmer ­territory. But we’re not that far away, either.

The next couple of rooms, set in 2007-08, continue this good work. Having remembered that English sunlight works differently from the Californian variety, and brings clarity rather than heat, Hockney looks first at the crazy blossoming of hawthorn bushes on the Yorkshire roadsides (it’s like someone spraying the hedges with shaving cream), then at a single tree cut down to a stump in Woldgate Woods. In this gallery, the drawings are better even than the paintings. Instead of the perfectly sharpened pencil of Hockney’s notoriously precise drawings, he picks up a slab of charcoal to record the fallen trees, and his lines grow unexpectedly muscular and expressive. In a show that seeks ­constantly to follow Van Gogh, these charcoal drawings are the closest we come.

Had the exhibition ended there, I for one would have gone home happy. Alas, in giving Hockney 11 grand galleries, the RA has forced him to keep forcing, and the gigantic installation that fills the central gallery, devoted to more views of Wold­gate Woods, reaches its climax with another garish whopper, in which the stylisation kills the simplicity.

Unexpectedly, the gimmicky-sounding iPad prints are another of the show’s successes. In Hockney’s hands, the iPad turns out to be nothing more complicated than a quick way of drawing; and in using it to capture natural effects before they disappear, he is merely con­tinuing the good work begun elsewhere. Another advantage is that the colours have an inherent paleness to them, a toned-down look, that acts as a built-in braking system when he reaches for the hipster purples and bow-tie yellows. In a show that prefers modest locations to dramatic ones, the nearest we come to some sublime landscape effects is a set of views of Yosemite National Park, achieved with, of all things, an iPad.

Even more surprisingly, the multi­part films that are playing here, created by driving slowly through the Yorkshire landscape with several banks of cameras mounted on the bonnet of a Jeep, all recording simultaneously, are unexpectedly gripping. David Hockney, video artist, sounds very wrong, but the journeys he creates with his overlapping banks of cameras have a cubistic complexity to them that is new in video art.

In the end, then, what threatened to be an overstretching of resources ends up as a mightily impressive event. The need to fill this huge sequence of rooms has forced Hockney to be more prolific than at any time in his career. And the adjustments he had to make to his vision on returning to the Yorkshire landscape make for a fascinating tussle. Not everything works, and a couple of the sections are unpleasantly gaudy, but, as a display of energy by an artist who is now 75, this is some statement.