An exhibition of Degas’s ballet paintings is a brilliant idea. Sadly, this Royal Academy show gets gloomily obsessed with technology 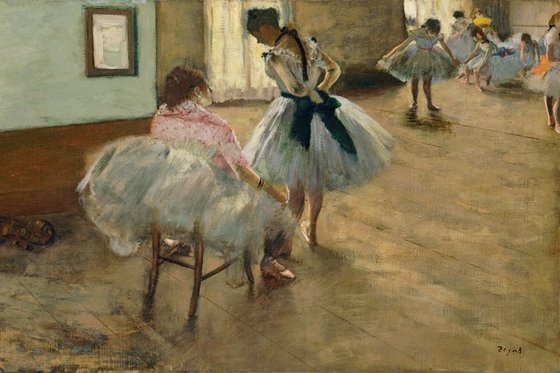 Among the big hitters of impressionism, the most mysterious and hardest to grasp is surely Edgar Degas. Nothing about him quite adds up. Between 1874 and 1886, he showed in all but one of the eight history-changing impressionist exhibitions — yet most observers of art have trouble thinking of him as an impressionist. As far as I know, he never painted a boat or a river or a sunny day. He didn’t do pleasing landscapes or beautiful gardens. He preferred bankers, horses, nudes and, of course, ballet dancers. Lots and lots of ballet dancers. So many ballet dancers that some will feel he preferred them too much.

Certainly, it’s hard to think of any artist, from any era, who is connected quite as firmly to a specific piece of subject matter as Degas is to dance. The popularity of his dance scenes in the reproduction market — on posters, postcards et al — has created the illusion that we are overexposed to them. But we’re not. In fact, getting yourself overexposed to Degas’s dance pictures takes some doing. The actual paintings, as opposed to the reproductions of them, are scattered across the world’s museums. No single collection has a definitive hoard of them. And, in my time as a critic, I have never previously encountered a show devoted exclusively to them.

High marks, therefore, to the Royal Academy for tackling this obviously delightful but also deeply mysterious subject. Any Degas show is worth a wait: a show devoted to his dance art strikes me as particularly valuable. I was looking forward eagerly to this event. Not for one moment was I expecting a display as sombre, gimmicky and counter-productive as this one.

Why are his dance pictures so difficult? Chiefly because dance is a subject freighted with awkward baggage. What kind of an artist goes out — or appears to go out — every night to the ballet? Painting ballet dancers over and over again feels frivolous and mildly decadent. The fact that Degas never painted male dancers, but exclusively teenage girls — sugar plum fairies in pink and pale-blue tutus — has a creepy aspect, too. Most important of all, dance, as an art subject, feels one-dimensional. Put crudely, once you have seen a dozen ballet dancers pirouetting on a stage, do you really need to see hundreds more? Degas’s dance project appears repetitive and interchangeable.

It’s a false impression, of course. I adore Degas’s ballet pictures and consider them to be among the most inventive achievements of impressionism. But they are definitely problematic. And I wish this Royal Academy show had tackled them head-on, instead of approaching the subject from such a tendentious angle.

Degas and the Ballet is subtitled Picturing Movement, and the display’s ruling ambition is to present Degas’s dance art in the context of the technological developments in photography that were taking place around him, culminating in the achievements of the Lumière brothers and the invention of film. The show assumes that you know Degas’s dance pictures pretty well already, and wish now to understand them in this new way. The first thing you see on entering is the shadow of a dancing girl revolving across the wall, as if in movement. It’s a simple trick, achieved with a stationary silhouette and a moving light source. The idea is to set an agenda for Degas that presents his dance art as a quest for movement. But when a show’s agenda has been created artificially by its designers, rather than by the artist, it rarely feels convincing.

One third of the show consists of Degas’s art. The rest examines the developing photographic technology of his time and the pioneering apparatus used to record various impressions of movement. Indeed, the central space of the display — the heart of the show — is a mini technology museum filled with flickering film reels and jumpily scratchy negatives. Thus, an artist who was intoxicated with dance and its colours feels here as if he is being x-rayed in black-and-white.

The journey commences and continues in twilight. The opening gallery is filled with a potentially marvellous selection of early Degas dance pictures — pastels, drawings and oil paints. But, because pastels and drawings need to be kept at low light levels for conservation reasons, the first impression is funereal. It would have been smarter to have begun with the oil paintings alone, turned up the light levels and exposed us to some of the shimmering and pulsing that Degas looked for in his dance art.

Just how adventurous he was is made subfuscly clear by a remarkable theatre interior, lent by the V&A, in which the painter looks up at the stage through the orchestra arranged in the foreground. We mostly see the backs of their heads, and beyond that a fuzz of dancing nuns on stage, who appear to be auditioning for the role of whirling dervishes. Yes, dancing nuns. In fact, it’s a scene from Meyerbeer’s opera Robert le diable.

The single most fascinating thing about Degas is that he was brought up to be a conservative artist, but metamorphosed instead into this wilful risk-taker. His compositions, his colours, the techniques he used and, yes, his choice of subject matter were all shockingly adventurous. Nobody had painted dance pictures like this before. Ballet, in this form, had only just been invented. So it’s an insistent fault of the display that it fails to convey the excitement of the moment.

Elsewhere in the opening room, Degas comes up with a fan design featuring a single ballerina who seems somehow to have left a magical trace of her movements in the atmosphere around her, like a speeding figure in a cartoon. This is brave and brilliant pictorial invention. Unmissable, even in the gloom.

Having front-loaded the journey with actual Degas pictures, the exhibition moves on to its main subject, which is Degas’s possible exposure to the photographic developments of his time and their possible impact on his dance art. I stress “possible” because hardly anything here is proven and almost everything is speculated upon.

A typical example is the section dealing with that peculiar sculpture of his, Little Dancer, Aged 14. A small girl in a thin tutu sticks her chin up in the air and strikes an impossible pose. (You try it: particularly the feet!) Degas showed it at the Sixth Impressionist Exhibition of 1881. This was actually the only one of his sculptures to be exhibited in his lifetime. The other bronze dancers included here were cast after his death, without his permission.

Originally, the Little Dancer was made of wax. So she too is now a post humous approximation. Anyway, the point the show tries to make about her is that Degas was influenced by something called photo sculpture, a popular gallery entertainment of the time that allowed for a figure to be viewed photographically from all sides at once. Various preparatory drawings by Degas show him displaying a similar ambition to see the Little Dancer in the round — as anyone would if they were making a sculpture.

It’s not that he was never influenced by any of the wacky photographic developments unearthed for us here. All this was in the air. In the case of Eadweard Muybridge’s famous experiments with animals and humans in motion, we know for certain that Degas took an active interest. Yet by handing over so much of the show’s attention to photo gadgets, by focusing so stiffly on the idea of photographic movement, we seem to be missing out on the more important stuff that lured Degas into his ballet obsession. As with so much modern exhibition-making, these feel like the curator’s obsessions, not the artist’s.

Thus, a section dealing with the fad for photographic panoramas of Paris leaps across to Degas’s oeuvre and suggests that the squat, wide picture shapes he sometimes employed in his ballet paintings were influenced by the Paris panoramas. In fact, the two have opposite pictorial ambitions. The extra-wide views of the city attempt to cram as much topographical information as possible across a single scene, while Degas’s spare and strange dance pictures plunge you into the distance with their outrageous diagonal perspectives and deep recessions.

For a truer sense of what fascinated him about dance, we need look no further than the three surviving dance photographs that he himself took. They are included in the show and have a completely different effect to every other photograph on display here. Suddenly, in Degas’s own hands, the dance imagery becomes visceral, instinctual, squinty, a touch naughty.