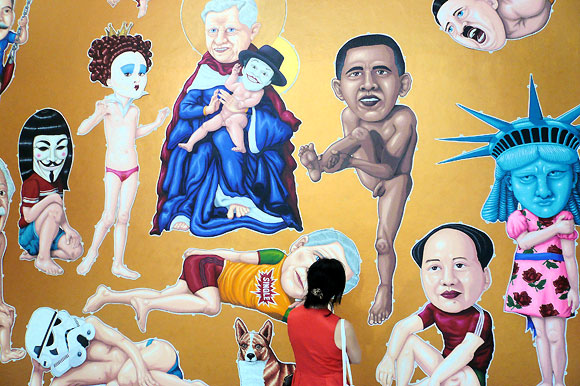 There is no such thing as a bad Venice Biennale. Too many delicious ingredients go into the biannual creation of this magnificent dish for it ever to go completely wrong. First, there is Venice itself. The moment I step out of my last car and onto my first boat, I feel transported to another reality, another chamber of the imagination, another way of seeing. Who needs a Tardis when you have Venice? Pack this impossible place with the pushiest modern art from the pushiest nations of the world; allow a crackpot curator with elusive guiding ideas to attempt to shape it; throw in the current political situation; sprinkle heavily with nutty Russian oligarchs and beautiful Hollywood A-listers; stir in envy, pride, greed; and you have a dish that nobody can spoil. Because it is spoilt already. Venice will always be a must-see.

That said, some biennales are more viewable than others. A tad more coherent. An ounce or two weightier. This year’s event is one of those. Indeed, the first six national pavilions I entered in the main Biennale Gardens were so exciting, so stimulating, that I jumped to the immediate conclusion that this was the best Venice I had witnessed. It was only after this superior amuse-bouche was finished that the disappointments set in.

The first pavilion, Switzerland’s, is occupied by the angst-sodden water cannon that is Thomas Hirschhorn. He has created a kind of agitprop grotto: a meandering, cascading, bulging network of tunnels and clearings, fashioned messily out of sticky tape and consumer disposables, with thousands of crystals stuck to them. It’s all called Crystal of Resistance. And, as I understand it, the appended crystals are a kind of antidote or fetish, attached to everything that is bad in the modern world: mobile phones, Hello! magazine, Barbie dolls. If you enter Hirschhorn’s pavilion imagining the Swiss to be reserved, you will exit it knowing they are not.

This kind of installation, the all-embracing maze of experience, is a favoured approach at this biennale. At the end of the opening promenade, in the site-commanding British pavilion, Mike Nelson gives us something similar. And just as good. Nelson has turned the polite former tearoom into a dark and grubby terrorist’s lair, a network of mysterious spaces in which some spooky Islamic plotting has been going on. Someone has been sleeping in this room. They’ve been taking photographs in this one. And turning to Mecca over here. If you’ve been watching the television recently, you will already have seen inside Nelson’s creepy installation, because Osama Bin Laden was assassinated in it. Or somewhere exactly like it.

In the actual American pavilion, the combative installation duo Jennifer Allora and Guillermo Calzadilla mount a witty and cunning attack on superpower politics and the role played in them by sport. Outside the pavilion, an upturned tank — a real one — has been converted into a running machine on which a genuine American pentathlete jogs relentlessly. Inside, a converted long-haul business-class seat has been reshaped into a complicated piece of gym apparatus, on which an impressive American gymnast (again, a real one) bounces, bends, stretches and vaults. So cleverly do Allora and Calzadilla mock the Olympic ambitions of their star-spangled hosts, those hosts may not even be aware that they are being mocked!

If all this sounds relentlessly political, it is. This is a very political biennale. Islamic issues are an omnipresent topic. The Chinese get a good bashing here, there and everywhere, with ubiquitous Ai Weiwei bags demanding the artist’s freedom across the entire event. The Polish pavilion, in a heavyweight outpouring of superguilt, has a weird trilogy of films by the Israeli Yael Bartana, pleading for the return to Poland of three and a half million Jews. Come back, screams this dark and scary film event, Poland needs you.

Like all recent biennales, the 54th has a theme; and, like all biennale themes, this year’s is essentially unfollowable. The director, Bice Curiger, a Swiss magazine publisher turned curator, has come up with ILLUMInations, a conflation of enlightenment and nationalism that finally suggests… everything and nothing? As a trained decoder of biennale themes, I suspect we are being nudged towards a touchy-huggy art experience involving the coming together of the 86 nations involved in the most international biennale so far. That is why, I presume, Denmark is represented by artists from China, America, Iran and Holland; why the amusing Venezuelan pavilion is filled with Francisco Bassim’s cartoon portrayals of the world’s leading leaders, from Obama to the Pope to Hitler.

Biennale directors always need a gimmick with which to make their mark in the silly, self-serving, feeble-minded world of international curatorship. For this one, Curiger has come up with the particularly gimmicky wheeze of opening the main ILLUMInations show with three paintings by Tintoretto. One is a Last Supper. Another the Creation of the Animals by God. They have been borrowed from the church of San Giorgio Maggiore and the Accademia Gallery, and are, unquestionably, great masterpieces. But what the hell are they doing in the world’s most prestigious survey of contemporary art? Perhaps they bring to the biennale what the appearance of Alec Guinness as Obi-Wan Kenobi brought to Star Wars. The illusion of maturity.

Certainly, the Tintorettos deserve better actual illumination than they get in the persistent twilight of ILLUMI nations. Spread between the central pavilion of the Biennale Gardens and the former Venetian naval barracks, the Arsenale, the main theme show chugs along happily enough in familiar international art mode, with occasional pauses for something special. I particularly enjoyed Urs Fischer’s giant wax re-creation of Giambologna’s Rape of the Sabine Women. Not only has Fischer turned this huge Renaissance sculpture into a bus-sized candle, he has lit it, so that slowly, unstoppably, the spectacular wax model will melt away. Oh how badly I wanted to jump up there and blow it out.

Continuing the light theme, the marvellous James Turrell psycho-capsule that was at the Gagosian in London last December is also showing here. And the prize for the biennale’s best artwork went, unsurprisingly, to The Clock, by Christian Marclay, a working 24-hour clock made entirely from flickering snippets of famous movies. I also enjoyed Song Dong’s rebuild of his old family house in China — another maze moment in the show. The outlying rooms are filled with the work of other international artists, so there’s lots of sharing going on here. Lots of crossing over borders. And a rather pleasing sense of international-art-world togetherness.

This is also the first biennale at which a strong Middle Eastern presence results in some strong Middle Eastern art. Previous biennales have had a tokenistic relationship with Arab art. I remember, in particular, the aggressive French curator Catherine David — possibly the most pretentious presence in the entire art world — forcing half a biennale of angry Algerians and Moroccans onto us, in a crashingly boring display of postcolonial French guilt. At the last biennale, the United Arab Emirates made a stronger showing. This time, the Saudis, too, are weighty and real, and the angers that drove the Arab spring are made so vivid here as to be almost touchable. I have long been of the view that if you really want to sense what is going on in a culture, follow the artists. Unless you are a Saudi king. In which case, your majesty, I would start packing immediately.

Away from Curiger’s well-meaning biennale, the madcap assortments on the fringe are as varied as ever. The removal of Tintoretto’s Last Supper from San Giorgio Maggiore has created a vacancy in the church for a defining piece of art, which Anish Kapoor has sought unsuccessfully to fill with an overly ambitious installation called Ascension. The idea is a reasonably good one. By inserting a giant vacuum cleaner into the roof of Palladio’s great dome — only in Venice would they allow anyone to do that — Kapoor has tried to create a column of swirling incense that rises up miraculously to the roof. Unfortunately, the wind coming in through the door keeps blowing most of the smoke away.

The Scots have their own pavilion, near the Rialto bridge, a typically crumbly rococo palazzo that has been taken over by Karla Black, an artist I usually admire. She makes floaty, wispy sculptures coloured in girly pinks and blues. Unfortunately, the Venetian rococo had exactly the same colour sense. Throughout the palazzo, Black’s contemporary rococo finds itself in a kitsch face-off with the pastel shades of the past. It’s all too much.

The best of the biennale’s peripheral exhibitions is Penelope’s Labour, at the Cini Foundation, an exploration of weaving — yes, weaving — both ancient and modern, in which our own Grayson Perry finds himself sharing a display with 15th-century Flemish tapestries and gorgeous Safavid carpets from Persia. Beautifully installed, with a poetic Arabian Nights mood to it, the show makes ancient exhibits look fresh and fresh exhibits feel ancient. Craigie Horsfield has created a dark and turbulent wall hanging that actually shows an anarchist pop concert, but feels, I swear, like a biblical crowd scene painted by Caravaggio. And Carlos Garaicoa, my favourite discovery perhaps of the entire biennale, gives us a set of brilliantly effective trompe l’oeil carpets modelled on the crumbling pavements of Havana. And to think I didn’t believe in magic carpets.